Found this fascinating little tidbit (1) that evokes a number of things worth mentioning: 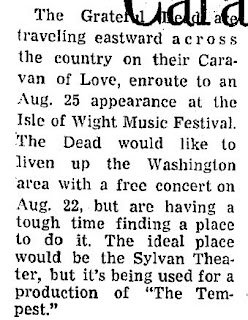 The Grateful Dead are traveling eastward across the country on their Caravan of Love, en route to an Aug. 25th appearance at the Isle of Wight Music Festival. The Dead would like to liven up the Washington area with a free concert on Aug. 22, but are having a tough time finding a place to do it. The ideal place would be the Sylvan Theater, but it's being used for a production of "The Tempest."

Why is this worth mentioning?

First, there's the possibility of the 8/22 free concert. By my reckoning, Jerry was at Heider's in San Francisco on 8/21 (scheduled to work on "50 States of Freedom" and "Oh Mommy" in a 5-9 p.m. session for what would become Brewer & Shipley's Tarkio) and at the Matrix on 8/24 with Howard Wales.

Second, related but more broadly, there's the funny notion that the GD were "traveling eastward across the country." In the two months prior to the writing of this article the GD had been in the Bay Area; Hawaii; Bay Area; Memphis; Bay Area; Port Chester, then E-W from Toronto to Calgary on the Festival Express; Bay Area; Southern Illinois; Fillmore East; Bay Area. Through August they would mostly be in the Bay Area (with a quick jog down to San Diego). If caravans had worked like that on the Silk Road Queen Elizabeth would have been wearing cotton, I daresay.

Third, I had never heard of the Caravan of Love. On a quick Google I found the following from dead.net, the filename of which attaches it to the date of July 25, 1970: 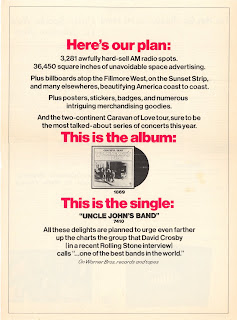 The July 25th date (here's a direct link to the large size of the image) does suggest that the "Caravan of Love" was the way they were going to market things. Probably a groovy wrinkle on "Festival Express". Tom Zito of the Washington Post writing about this may just mean that he got the memo, so to speak.

Fourth, for the record I believe 8/22 would have been the GD's first appearance in Washington, DC. As it happened, that ended up taking place on October 23rd at Georgetown.

Fifth, I am fascinated by the assumption here that the GD were playing the Isle of Wight in 1970 (on 8/25). The festival seems to have been the last week of August. Does anyone know more about this? Were they scheduled to, but bailed out? (Perhaps they needed to finish the album?) Was this just wishful thinking? Just wrong?

Anyway, music business sure seemed like a pretty fluid proposition ca. 1970, all right.